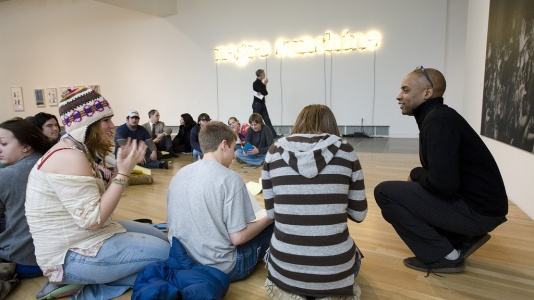 The Wexner Center welcomes back, Glenn Ligon for an artist talk on October 29, 2013. “His compelling works explores issues of race, sexuality, and identity in America and have been featured several times in our galleries, most notably in the 2007 solo exhibitionТ Glenn Ligon: Some Changes. In addition to being collected by nearly every major American museum, his work also hangs in President Obamaтs private living quarters at the White House. Ligon was the first artist thatТ Blues for SmokeТ curator Bennett Simpson approached about the exhibition, a conversation that led to the artist serving as a close advisor for the show. An insightful cultural critic, Ligon has contributed an essay about the HBO seriesТ The WireТ (on view inТ Blues for Smoke) to the exhibition catalogue.” -www.wexarts.org

What is the Shumate Council?